On September 30, 1988 5:19 p.m. at Nanaimo Regional General Hospital in Nanaimo, BC, Kristal O’Regan was born, gasping for each breath of air. At 11:20 p.m. she was air lifted by helicopter to Vancouver to BC Children’s Hospital, arriving just past midnight October 1. She had exploratory heart surgery on October 2.

Joan O’Regan, her mother, remembers that day. “They did not know what they were dealing with or what the problem was before the heart surgeon operated.”

The day before the surgery, she and Kristal’s father received a phone call from the children’s hospital discovering the need for the life or death surgery– they were not asking permission. During surgery, Kristal needed a blood transfusion due to the massive loss of blood.

“We both(parents) wanted to give our blood but there wasn’t time to check for impurities and diseases, so they (doctors) said no. It was life or death.”

The surgeon discovered Kristal was born with a congenital heart defect, a vascular ring, co-dominant double aortic arch, an abnormal formation of the aorta (the large artery that carries blood from the heart to the rest of the body) which splits into two vessels instead of one after it leaves the heart and surrounds the esophagus and trachea.

According to the University of Maryland Medical Centre: “ In double aortic arch, some of the arches that should have changed into arteries or disappeared are still present at birth. Babies with a double aortic arch have an aorta that is made up of two vessels instead of one. The two parts to the aorta have smaller arteries branching off of them.”

“Normally, the aorta develops from one of several curved pieces of tissue (arches). As babies develop in the womb, the arches split into several parts. The body breaks down some of the arches, while others form into arteries. A normally developed aorta is a single arch that leaves the heart and moves leftward.”

Joan was told, “There are only a few cases of vascular ring each year and most children do not show symptoms until they are around school age.” In Kristal’s case, “both aortas were the same size and they debated which one to cut.” She was left with a right aortic arch. Complications related to a right aortic arch include breathing problems such as pneumonia, asthma, and general breathing problems while exercising.

The road ahead wouldn’t be easy. Kristal was in the hospital for three weeks while her parents stayed at the BC Lion’s Society’s Easter Seal House within walking distance of the hospital. During these three weeks the O’Regan’s took many baby photos at Children’s Hospital. Some of them featured nurses as well. Kristal’s first baby rattle, Fozzie Bear, was given to her by a nurse. Her head was shaved in order to hook up IVs and other machines, so the memories were not traditional but a blessing nonetheless.

“Most doctors and nurses were very caring and informative. Sometimes there would be a difference in opinions between staff members as to how to treat regarding pain management,” Joan said.

Young children can experience breathing symptoms such as high-pitched sound during breathing, noisy breathing, repeated pneumonia, wheezing and digestive symptoms such as choking, difficulty eating and swallowing and vomiting. A double aortic arch can be identified with chest x-rays, CT or MRI scans(create cross-sectional images of the body), echocardiogram(ultrasound of the heart) and a barium swallow(an x-ray that outlines the esophagus). Surgery is the only form of treatment to date and most children feel better after surgery though some still have breathing problems. There are rare cases in which the arch presses down very hard on the airway, causing severe breathing difficulty that can lead to death.

Meet baby Aubrie, from South Egg Harbor, New Jersey, USA, now 7 years old, who has already had quite an extraordinary journey with her double aortic arch.
Grandmother Diana tells her story, “We found out 5 months in utero during a routine ultra sound. We had never heard of D.A.A.(double aortic arch) until Baby Aubrie.”

CHDs( congenital heart defects) are rare in itself but to be found during pregnancy is especially rare. “20% will die from a CHD. Many cases are misdiagnosed as asthma and some die because of that.”

There were no signs during the pregnancy of a CHD. It was the ultra sound technician who found the CHD during the ultra sound. This made doctors prepared for the condition before she was born. There was a NICU (neonatal intensive care unit) team waiting for her while she was being delivered.

Once diagnosed, by doctors’ orders, her mother went in for ultra sounds every three weeks throughout the rest of the pregnancy to do echocardiograms on Aubrie’s heart to make sure she was not getting worse. She stayed stable throughout the pregnancy. “Chromosome 22q11 deletion, Trisome 18, Down Syndrome and many other anomalies are sometimes linked to CHDs.”

Aubrie was genetically tested at birth and has none of them, being very lucky to have only suffered from the D.A.A. alone.“She does have the noisy breathing, coughing and choking, but never turned blue,” Diana said. “The doctors told us that 90% of parents who discover this diagnoses during pregnancy abort.”

As with Kristal, Aubrie was born with two aortas instead of one, joined together making a V.R. (vascular ring) surrounding the trachea and esophagus. Doctors told Aubrie’s family that as the body grew, neck muscles and other organs, the ring would not. It was constricting her breathing and could eventually kill her if not operated on. The longer you wait, the less chances of a good outcome. Some people after surgery still have complications due to the scarring from the vascular ring.

After Aubrie was born, she had to have regular echocardiograms and EKGs done. She was seen by a cardiologist and her pediatrician on a consistent and regular basis to monitor her condition, her family traveling out-of-state to and from DuPont Hospital, in Wilmington, Delaware, and staying in a hotel.

“Because D.A.A. is less than 1% of all CHDs and rarely caught during pregnancy, the doctors were not all too sure about what to do,” said Diana. “They didn’t want to do it too late due to scarring and possible death, but because Aubrie was stable they wanted her to wait so she could gain and be a healthy weight for surgery.”

“We waited until she was 15 lbs to do a heart MRI [in which] [s]he had to be sedated. That’s when we found out that Aubrie has a co-dominant arch which is only a 5% chance. They (team of doctors) had a meeting and decided which to cut. They did surgery a month later. The team calls her ‘Famous Aubrie,’ because her entire case in every way you look at it is extremely rare. She has broken the mold.”

The only problems the family encountered with Aubrie was when she had to have her MRI. She had problems with sedation, she couldn’t breathe. But when she had surgery she was intubated( placement of a flexible plastic tube into the trachea to maintain an open airway to help administer certain drugs) so it didn’t happen again and also had the tube in an extra day.

“One of the worst things she went through was when the nurses didn’t realize that her medication IV for morphine fell out because it was wrapped in gauze. They kept saying she wasn’t resting well and that she wasn’t responding to meds,” Diana said. “No duh! The first thing they should have done was check the IV site. So my poor G-Baby suffered for 24 hours in pain. She was so exhausted that she would cry and kick her legs but rarely open her eyes. It was pure torture for my entire family. That ticked us all off and I don’t like to talk about that. Once they figured it out, Aubrie finally slept.”

Doctors said that sedation plays a huge role in Aubrie’s recovery because they pain would make her blood pressure rise and her blood vessels would swell. She was put on BP medication, Motrin, Tylenol and Morphine; had a intubation tube, oxygen, 2 IV lines, an arterial line and a chest tube during and after surgery. Aubrie will be monitored on a regular basis for several years to come and will always be monitored.

As with other cases, her symptoms, such as breathing problems, will decide her future with physical activities. Diana says, “ She has been absolutely amazing through all of this. She is such a happy baby and smiles all the time. The only thing she has left to prove any of this is her three scars, her battle wounds. The nurses kept saying she doesn’t look like a heart baby, she doesn’t act like a heart baby. All we could do was smile and be thankful for our beautiful gift. Aubrie no longer has a broken heart.”

Diana has become very knowledgeable on the subject, has done her research as well as taken note of what the doctors have told her. So she can help others as well as her own granddaughter.

I would love to meet Aubrie, who I found through Facebook, in person one day, as she is how I was able to find and connect with others, though Facebook groups/pages, with the same condition as me. I, Kristy O’Regan, am now a 29-year-old survivor of this condition, here to let others know of its existence. 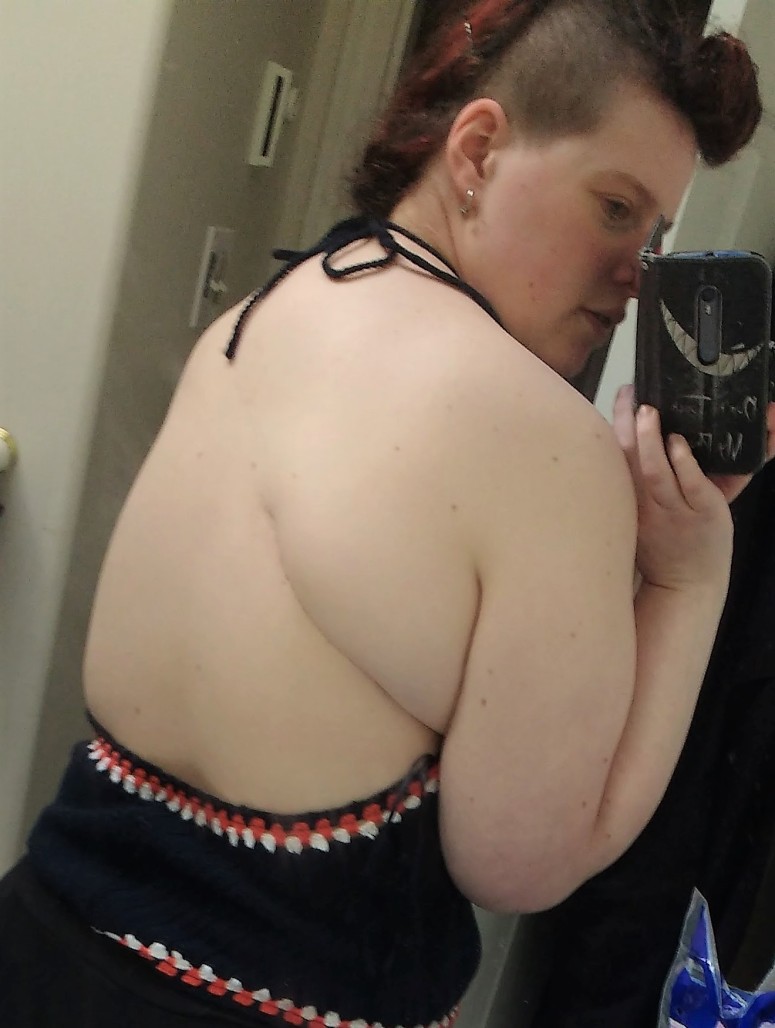 5 thoughts on “Heart of the Matter”