I had the chance to ask Miranda Turner a few questions about her unique pets, including a very special duck named Petunia.

When did you decide you wanted a pet duck?

“It was sprung on us without warning. Back in 2010, Patrick [now husband] and I were volunteering at the World Parrot Refuge and had become very good friends with the owner, Wendy. On our weekly visit out, Wendy came over and asked us if we could help her with something. Some people had surrendered their parrot but only on the condition she also take in a duck that their dog had attacked. The poor thing only had one wing and could never be released into the wild. But due to strict wildlife regulations, it is ILLEGAL to have a wild duck, and she was afraid of word getting out about this duck. So we brought it home and named it Ducky. After a bit of research we found out ducks do best in pairs or groups and that’s where it all began.”

*Nanaimo does have bylaws in place regarding wildlife such as rabbits and ducks (poultry), with restrictions, such as limits as to how many of each you may own, and fines associated with breaking these laws. Check your area’s bylaws regarding ownership of wildlife before considering having them as pets.

What kind of animals do you have and how do they all get along?

“We currently have cats, dogs, 1 parrot, ducks and rabbits. My special needs cat doesn’t get along with most of our pets and other than that, pretty much everyone else does get along.”

Do you find it rewarding?

“I’m happy to rescue any animal that I can. Nearly all of our pets are a rescue in one way. The most unusual of the group is our dog, Cyrus, he came here to Vancouver Island from Kuwait(yes, the other side of the world). We were only supposed to foster him, but he got along so well with out other dog and all our pets that we decided to keep him. The only down side to having all these wonderful pets is it’s hard to go anywhere. Everyone has to be let out to run around during the day and then put away for safety at night, and it can be tricky herding ducks. The rabbits and parrot require a special diet, and then there is the constant cleaning up!”

What kind of adventures has Petunia been on?

“We got her when she was about a week old. She was given up by her owner because she had Wry Neck Syndrome (torticollis) and would need extra care to hopefully cure it. And thankfully with some liquid Baby vitamins and some love she made a full recovery in 24 hours!! Petunia is what I call a 50/50 Imprint. She thinks she’s people and will follow me everywhere but she will gladly go spend the afternoon outside with the other ducks, doing ducky things.”-Miranda’s Facebook photo album of baby Petunia

“Petunia is a pretty spoiled Fid (fur/feather kid). She gets to go paddle boarding up at Westwood Lake as part of her therapy for her arthritis (she can barely walk but swims like a fish). She has been out to Alberta at least twice to visit family. As a baby she got to go to the Velodrome in Victoria to watch Patrick. She gets to go to the ocean to eat baby crabs and swim in the summer when it’s warmer out. Last year we checked off one of her bucket list items which was to ride a Ferris Wheel with West Coast Amusements when they came to Nanaimo. I just found a helicopter company in Campbell River that said they would let her come out for a helicopter ride, but until I get it in actual writing I won’t get my hopes up.” 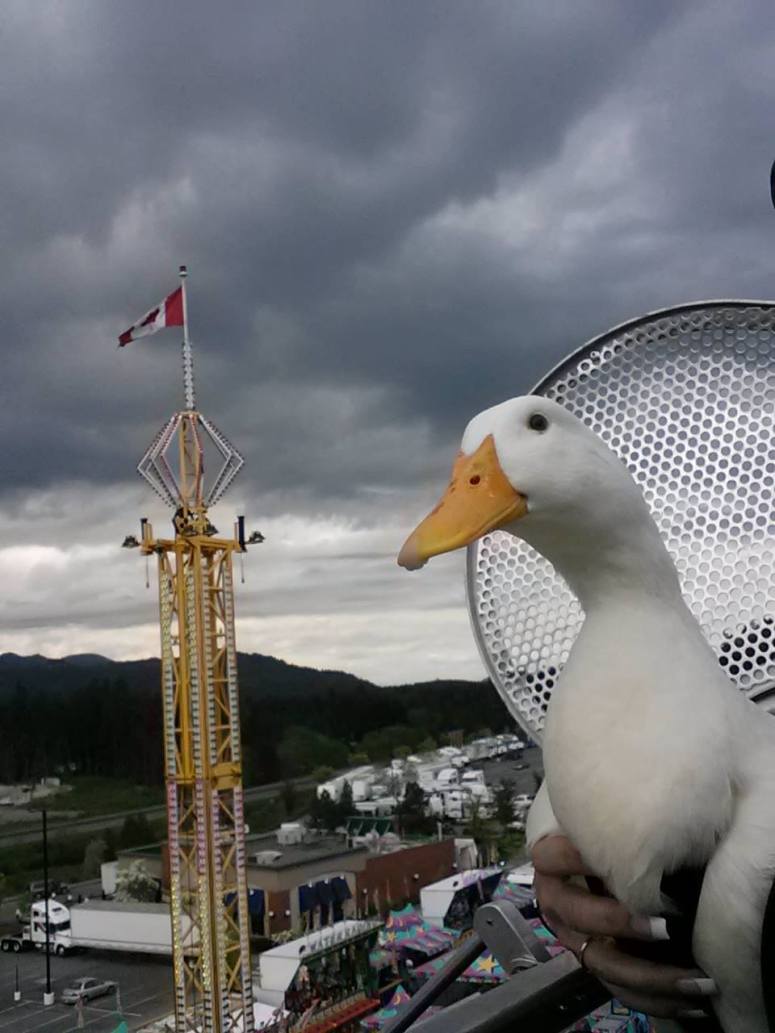 What kind of challenges do you have as a duck owner? and as an owner of many animals?

“The biggest challenge is finding a vet. I have about 5 different vets I have to use because not everyone deals with bunnies, or ducks, or is available when we need them. Although, lucky for us, we did manage to get a bit of training from our time at the World Parrot Refuge, myself growing up on a hobby farm, and Patrick’s first aid training, so some things we can deal with ourselves.”

Has anyone ever told you having a pet duck is crazy?

“No one has ever told me a duck shouldn’t be a pet. Most people are so surprised and think it’s great, especially when we are out at the lake and she follows along behind me or is asleep on the paddle board. I do get a few people who tell me when they were younger they had a pet duck or grew up on a duck farm and how much they miss having them around. I also get people telling me how tasty ducks are and that I should just eat her.

Having a pet duck or pet poultry has really evolved over the past few years. I am friends with Nettie, the owner of Party Fowl on Etsy. She makes custom duck diapers so your duck can roam around the house and there is no mess. I know Carla and Daniel, [who] recently became an internet sensation after accompanying Carla on a flight in the U.S. as her therapy pet.  Carla Fitzgerald Check her out, she’s a pretty awesome lady and Daniel is an amazing duck.”

What advice do you have for anyone who wants to have a pet duck?

“Pet ducks are awesome, just like dogs. But they require more attention and maintenance and it’s a lot harder to find a vet. If you think dog hair is annoying, wait until your house turns into a snow globe when they molt! Adopt don’t shop! There are hundreds of animals locally waiting to be adopted and YES that includes ducks! If you can’t adopt, volunteer at a local shelter, they always need support!”

Check out Miranda and Petunia’s Etsy page: The PuddleDuck Store