Nanaimo, on Vancouver Island, in British Columbia, Canada isn’t known for many things, aside from the Nanaimo Bar desert, the international Bathtub Races, Diana Krall etc.. What should be added to that list is a newly popular, ever-growing FREE Curious Comicon!

May 6, 2017 was their 3rd year, and biggest turnout so far! Curious Comicon takes over the entirety of Country Club Centre, helping make it a free event, as well as help the businesses in the shopping centre, not to mention the home of Curious Comics Nanaimo, who put on the event.

The purpose of Curious Comicon is to make Free Comic Book Day a whole lot bigger, bring together some amazing local merchants, get kids and parents geeking out and the biggest goal, to help raise money for the Children’s Wish Foundation of Canada.

Children’s Wish grants wishes to children from ages 3-17  with life threatening illnesses. It’s the largest and only all Canadian wish granting charity.

This was my very first convention EVER! For it being small-scale in comparison to other cons, I was overwhelmed! It was great to see kids and parents dressing up together and sharing the love of imagination. My Free Comic Book Day haul: 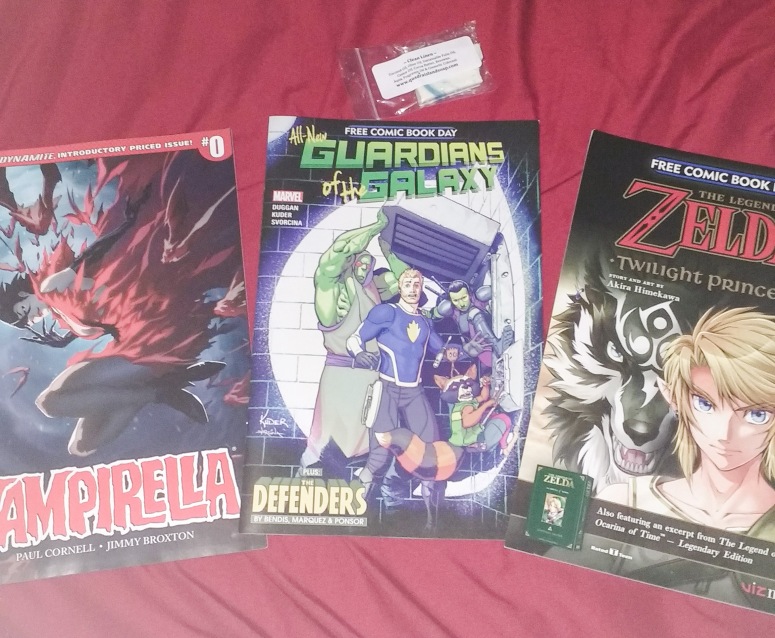 Yes, that’s a small bar of soap in the photo. I got a free sample from Quadra Island Soap, which had really cool Pokeball bath bombs which contain a little toy inside! (Didn’t have any cash or else I would have snagged one!) We we only allowed to choose three free comics, so I made my choice wisely. Vampirella, because I’m kind of vampire obsessed, Guardians of the Galaxy because duh the sequel is out in theatres ( it kicks ass by the way), and Zelda for the nostalgic( watched others play the game, never got to myself but always fascinated by it).

I attended this Comicon with two other companions. Here is what they thought of Curious Comicon:

Courtnay had this to say about her experience: ” I really wasn’t too sure what to expect from it because I’ve never been to a proper convention or anything close, really, but it was a lot of fun getting to geek out over all the fandom stuff around other people who got it and didn’t act like I was weird for loving or getting excited about things like that. I would definitely do it again in a heartbeat.”

“It was super cool seeing kids as well as adults in cosplay. It’s a great sight, seeing parents encouraging their children to dress up, and vice versa. Already they have something in common that they can both be passionate and excited about, and it just warms my heart knowing that geeking out at these kinds of conventions are more and more becoming the common norm. It’s something I never saw much of growing up and I wish that had been happening more back in the day,” says Angela.

When we were getting ready to leave, we seen a mom arrive, with a home-made costume, in which Angela got really excited. (in case anyone doesn’t know from the photo, this is Sailor Venus from the Sailor Moon Series)

I cannot wait until the next Curious Comicon, in which I hope we can make it another huge success!!

One thought on “Small Town Comicon for a Cause!”