If you don’t know who Metallica is, you better look those guys up first. Oh hell, here’s one of their tracks:

Ok, so you now have a sense of what Metallica sounds like. Now take some of their best tracks and have four guys from Finland play them on cellos. Confused yet?

I had the greatest pleasure of seeing Apocalyptica live at the Commodore Ballroom in Vancouver BC. Excited because it’s my second concert that I went to alone. This time I was a lot more prepared and it made for a much smoother and better concert going experience.

First off, I only packed what I absolutely needed, so one backpack came with me for my trip from Nanaimo on Vancouver Island taking the BC ferry over to Vancouver.  I purchased my ticket as early as I could, this made sure that I paid the cheap price as opposed to the outrageous jacked up prices closer to the date of the show; and I purchased straight from Ticketmaster as to not be dicked around by any of those re-seller sites. I also opted to pay the extra couple dollars to have my ticket mailed directly to me so that I didn’t have to wait in line at the venue twice. I prefer the nostalgia of an authentic ticket as opposed to a paper print out or mobile phone screen.

Since I only took a backpack with me, being a girl (who normally carries a purse full of crap) I didn’t take a purse. Instead, I searched high and low and Walmart ended up being where I purchased my men’s cargo pants with enough pockets and room in those pockets to fit a wallet, phone and my ticket. (and since I figured it was a rock show cargo pants were the style I was going for)

I made sure to search for accommodations as soon as I had purchased my ticket. I opted to go with the place I had stayed previous, Samesun Backpackers ,  a cozy hostel that’s only a few blocks from the venue. Which gives me my exercise, it’s a nice walk to and from the show, plus close to everything I need. Since I was going alone, and I’m still not that comfortable with strangers, I decided to shell out the extra cash for a private room.

Doors were at 8 pm, so I was in line by around 7:30 or so.  I was part way down the block which wasn’t a bad spot in line. As soon as I got in to the main ballroom, I seen a few spots right at the front. So I bee-lined it to the barrier with a big grin on my face. In between sets, I turned around to chit-chat with a few people, still keeping my spot.

While in line, my anxiety kicked in hyper-drive. I felt like I didn’t want to be there, I almost felt kind of sick, I was by myself and in a place I’m not used to so I was a bit sketched out. But a sense of relief and victory washed over me as I reached the barrier and I found myself loosing my voice from all the screaming I was doing, being a little fan-girl. The show itself became my anti-anxiety and anti-depressant. I was smiling and bopping my head and ignoring the pain in my feet from standing.

Alright alright, get to the music already.

Apocalyptica, as I said are from Finland. Four cello players and a drummer. They started out way back in the early 1990’s playing Metallica covers and have released 8 studio albums to date. Their sound is quite unique, since they are known for playing metal music on cellos. Yes, you can turn a cello into an electric guitar, and it’s pretty badass!

Their sound goes further than just “metal.” You can hear the passion in their original tracks, classical but not at the same time. You just need to listen for yourself. I feel like each track takes me on a musical journey, sweeping me away to experience each emotion in depth, as if the music yanks my soul from my body and cleanses it completely.

Back to that track, “Master of Puppets,” here is Apocalyptica’s live version:

Being an instrumental show, it was up to the audience to sing they lyrics. Sing they did, and scream and headbang. For those there who were Metallica fans, it was a real treat to have two in one. For those (like me) who prefer Apocalyptica’s versions of those tracks, we just soaked up the atmosphere of the superfans.

Here are my shots from the barrier: 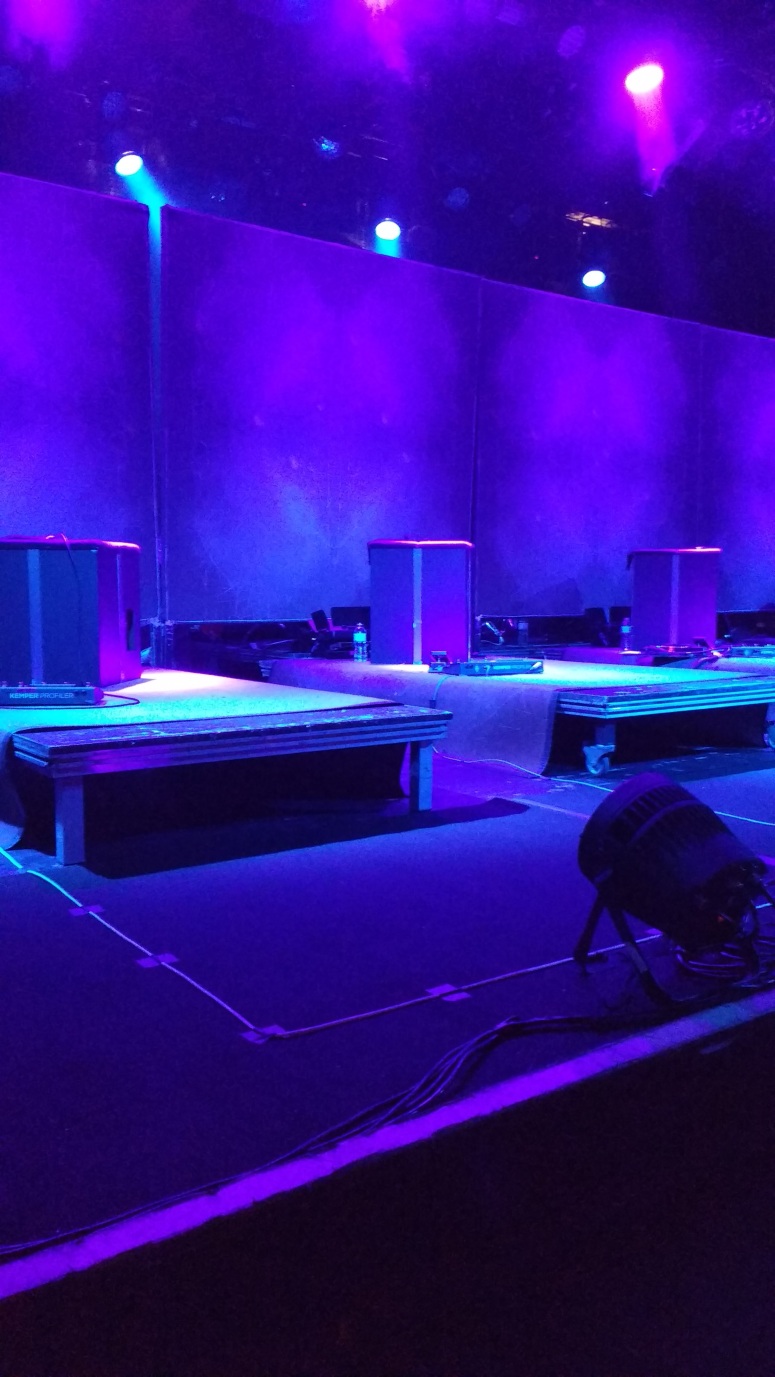 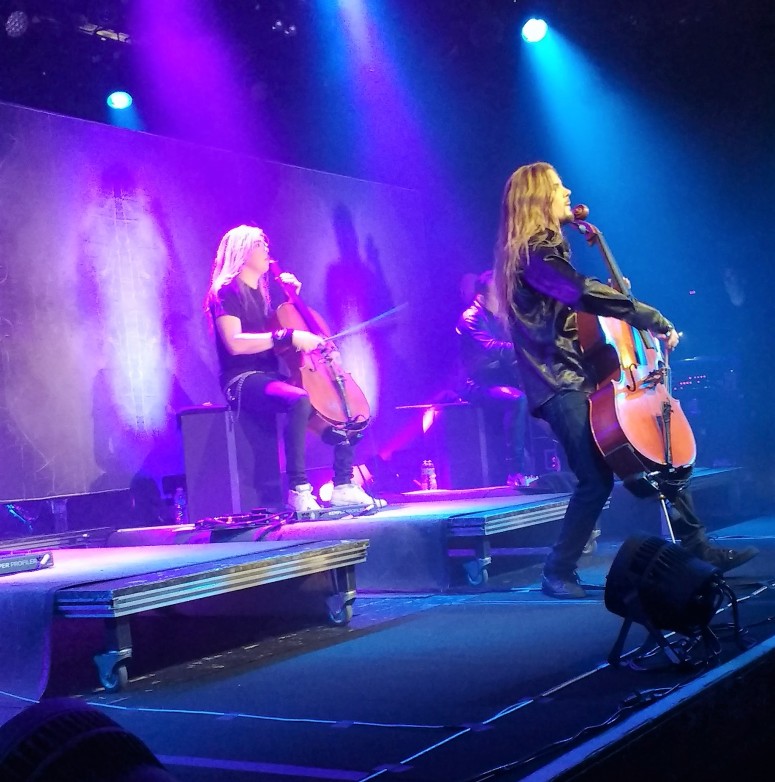 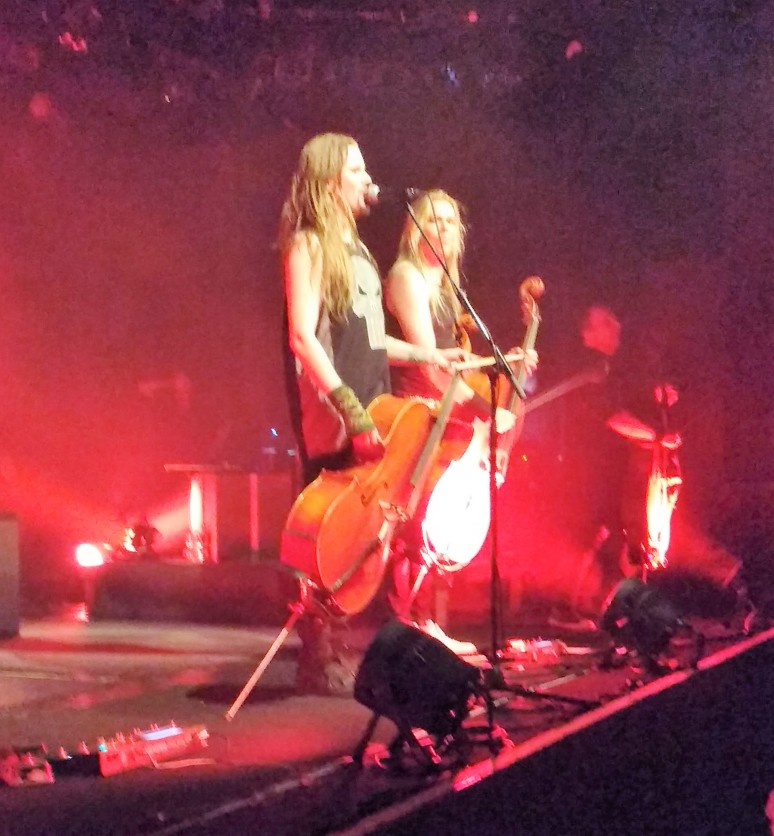 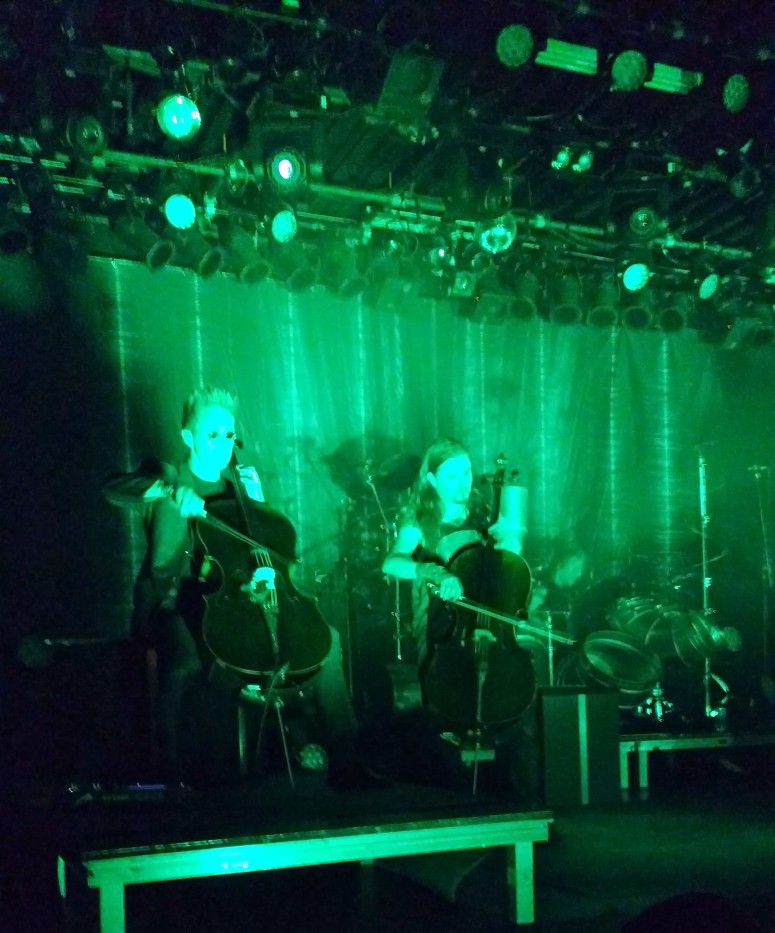 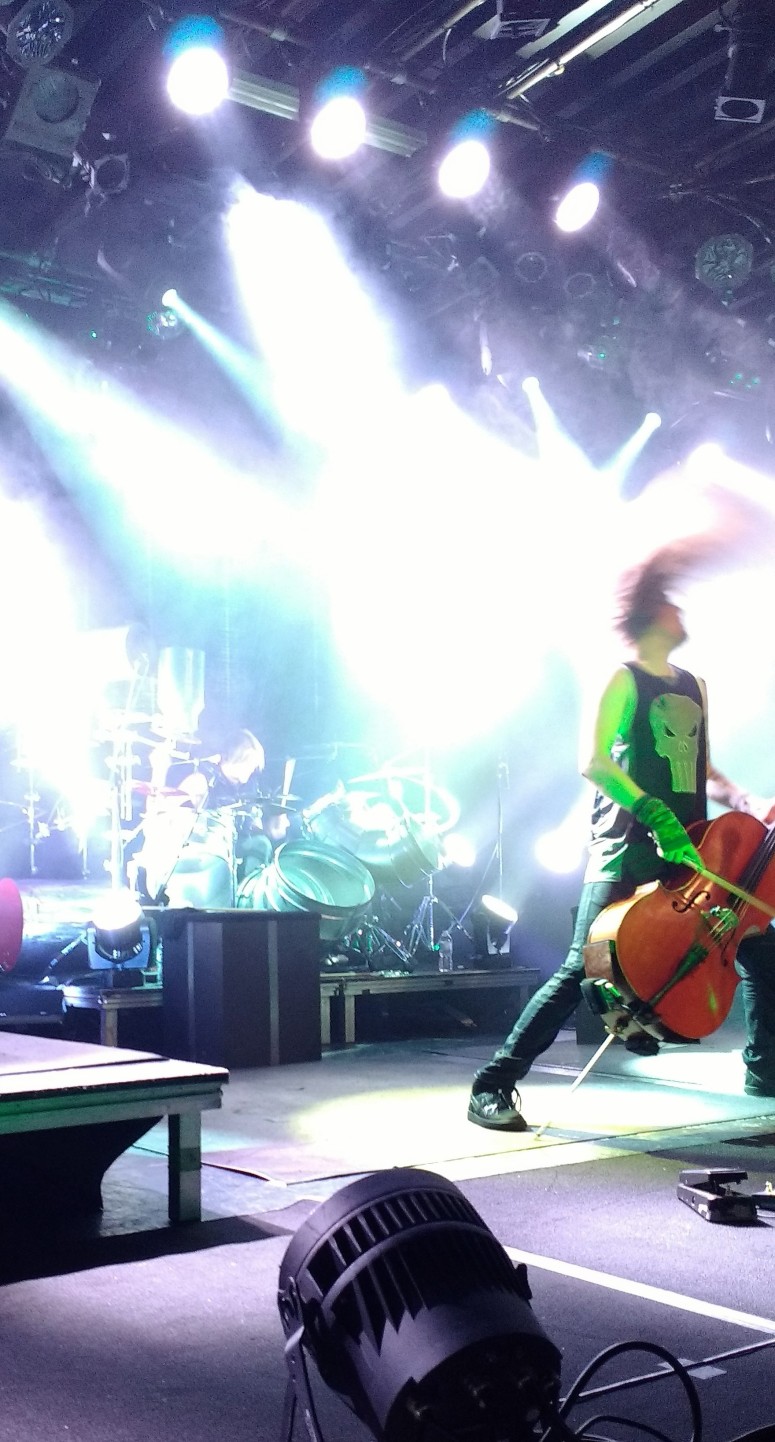 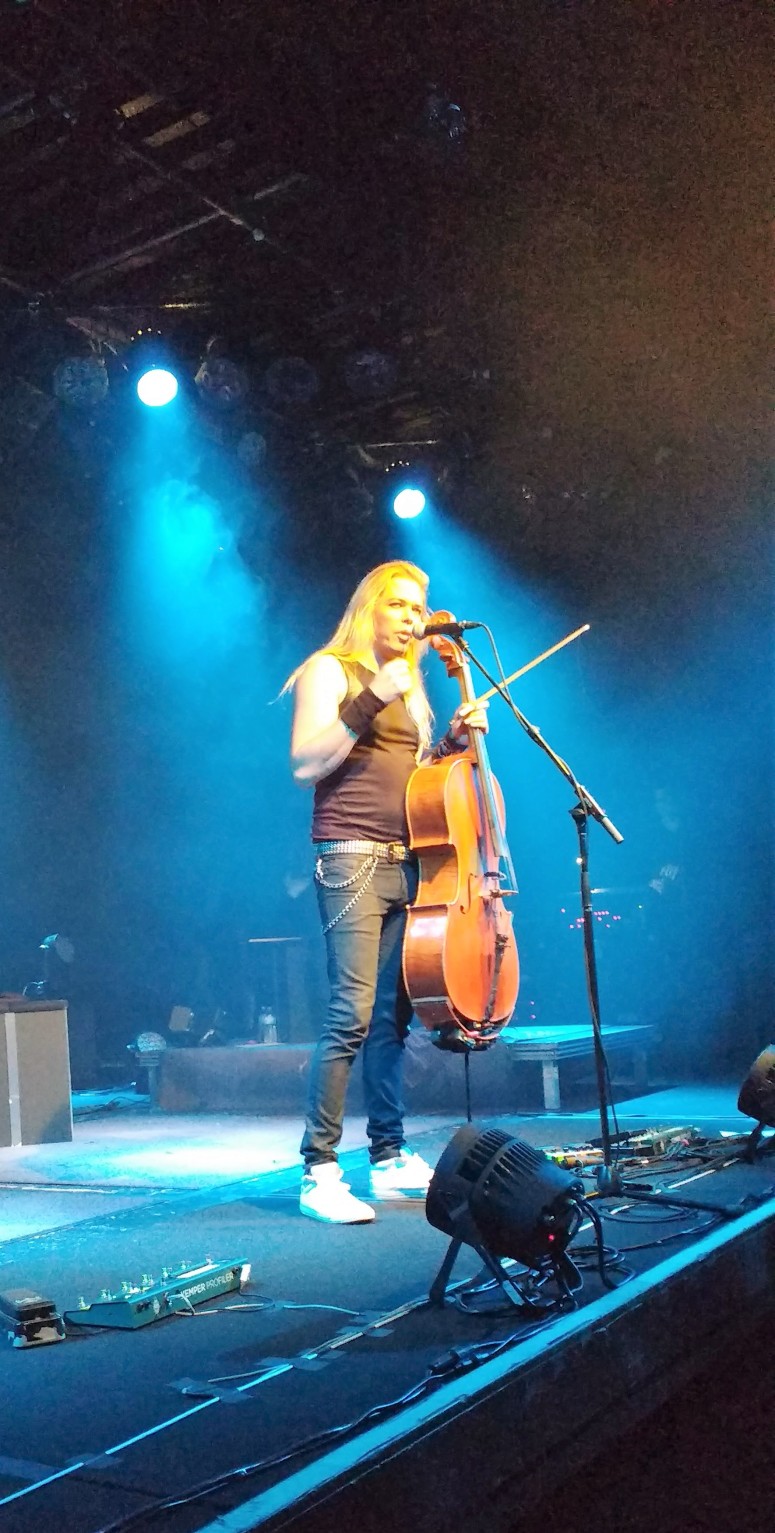 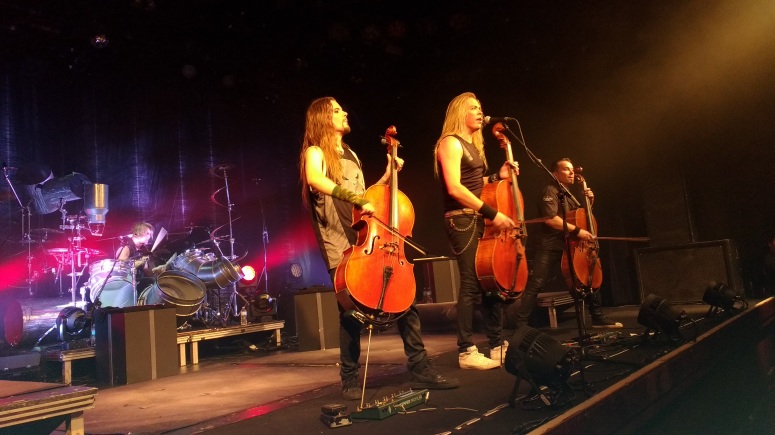 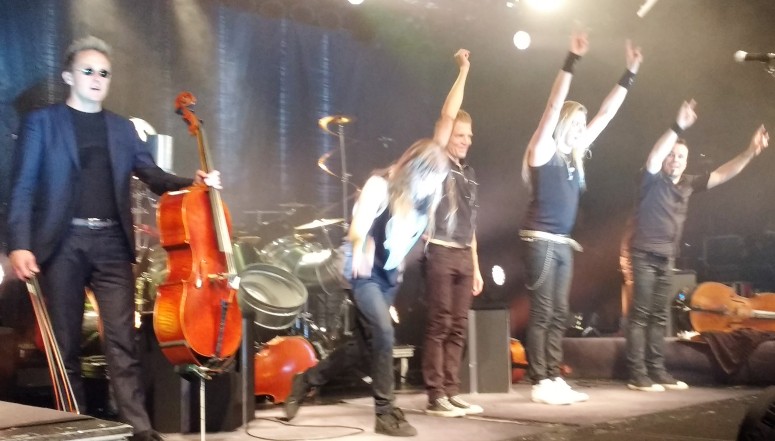 Here’s the one lonely video that managed to save to my Google Drive [hate technology sometimes, I had a few videos short little clips 😦 ]:

I decided I wanted to look like (or my rendition of anyway) Harley Quinn, as a confidence booster to look good, she’s become my inspiration and obsession.

It was an amazing night and I don’t have any regrets! I highly recommend these guys. There is no audience they can’t captivate. (In my humble opinion anyways. )

One thought on “Apocalyptica Plays Metallica By Four Cellos”